Located in the Balkans region, Croatia has become one of Europe’s top tourist destination. Croatia boasts its share of medieval cities and historic ruins, but what makes this small country exceptional is its wealth of stunning natural attractions such as the Plitvice Lakes, the spectacular Adriatic coasts and gorgeous islands. 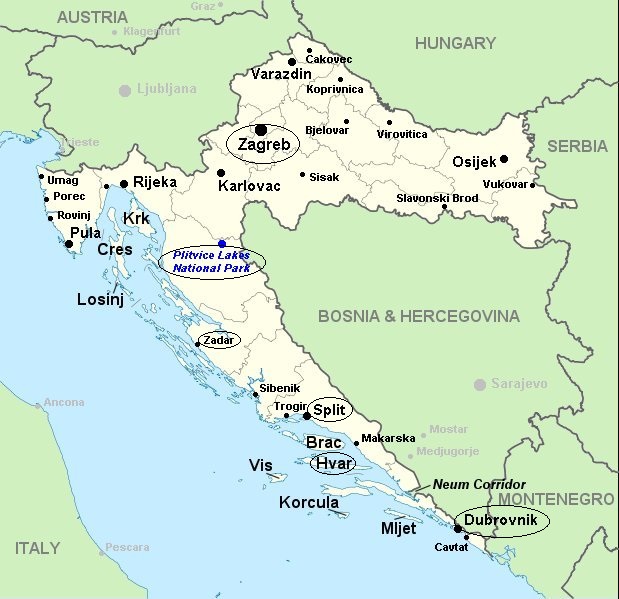 Fly into the central city & capital of Croatia – Zagreb. The city boasts a charming medieval ‘old city’ with architecture and cobbled streets reminiscent of other European cities. The historical part of the city is composed of a medieval urban complex of churches, palaces, museums, galleries.

Explore more of the city of Zagreb at your leisure.

One of the most beautiful natural wonders in Croatia, the Plitvice National Park consists of several breath-taking lakes, waterfalls and lush forest. The park’s most notable features are the 16 interconnecting lakes. Formed by natural travertine dams, the lakes range in unique colours from turquoise to blue, green and grey.

You can explore the lakes and surrounding area by walking along the assortment of wooden walkways as well as by boat.

A 3000 years old city situated on a beautiful coastline – Zadar. The old town which offers fantastic sights including Roman ruins, medieval architecture and old churches. You can explore a string of beautiful beaches all along Zadar’s coastline where you can sunbathe, swim and relax.

Split is the 2nd largest city in Croatia & also known as “Mediterranean Flower”. The city’s main attraction is its historic core of beautiful Gothic and Renaissance architecture of the Diocletian’s Palace. This Roman Emperor palace complex is more like a small city itself with a maze of marble walkways and buildings containing shops, cafes and bars. Outside the historic centre, there is plenty to explore and do including strolling along the seaside promenade, shopping and swimming at the beach.

Explore the islands of coastal Croatia on a 10-hour Hvar Island and Blue Cave tour from Split. Get on a speedboat in Split and venture onto the Adriatic Sea. Explore the pretty fishing villages and discover the famous Blue Cave. Post lunch, swim or sunbathe at your leisure and discover rich heritage and ancient architecture on Hvar Island.

The old city of Dubrovnik is one of the prominent places to visit also nicknamed the ‘Pearl of the Adriatic’. With orange rooftop houses sitting in contrast to the blue sky, Dubrovnik presents many sightseeing treasures. The historic district, the Old Town, is stuffed with many historic features such as the old, defensive walls, cobblestone streets, magnificent palaces and stunning churches. Just outside the Old Town are popular beaches like Banje and Lapad.

The city has spots where the legendary HBO TV show ‘Game of Thrones’ has been filmed. Board the same ship that Daenerys Targaryen sailed and then walk into Dubrovnik’s Old Town to discover where other famous scenes were set.

Explore more of Dubrovnik Town at your leisure.